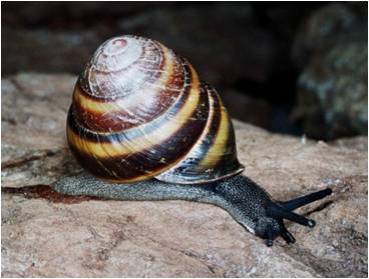 Mitchell’s Rainforest Snail, Thersites mitchellae, is a large native land snail with a shell up to 55 mm wide and 50 mm high, triangular in profile and with a thickened lip. The shell is yellowish in colour with broad brown to dark brown spiral bands. The body colour is black with a thin lighter line along the back.

Found in remnant vegetation on the coastal plain between the Richmond River and Tweed River on the NSW north coast, it has also been recorded from some adjacent mid-elevation areas including Wilsons River and Mount Jerusalem.