The Animal Kingdom evolved somewhere between 700 million and 1 billion years ago from single celled Protista. Land snails like many species are the product of more than 3 billion years of evolutionary change. The earliest gastropods were exclusively marine, but by the Mesozoic Era, about 248 million years ago, many had adapted to terrestrial and freshwater environments.

Sea Snails: Where it started 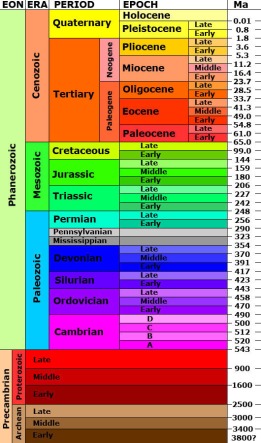 Gastropod fossils have been found in Lower Cambrian rocks and are the oldest known molluscan fossils. The earliest snails were sea snails from the now extinct Order Bellerophontina and evidence of a modified limpet-like shell with 2 whorls  shows an early evolution of the moveable shell that can be rocked forwards over the head [Solem, 1974]. Evidence shows these bellerophontina existed from the Lower Cambrian to the lower Triassic Periods.

Primitive snails browsed on stationary organisms using the radula [ribbon of teeth]. Unable to quickly pursue active prey, they used their gliding foot to browse. They needed to rely on a physical shield and camouflage for protection.

An early adaptive change was the completion of the digestive tract with a mouth at one end and indigestible matter excreted from the other end.

External gills evolved as the molluscan body became too large to rely on respiration through the body surface. These gills would have been exposed to predators and this led to the development of the mantle for protection. Shell extension also provided additional safeguard. At this point, the shell began its transition with the development of a slight spiral bend. This gave the advantage of a slightly lower shell.

Later, snails began moving about the shore searching for food using their gliding foot. The anterior sensory equipment was developed and the shell as a structure for protection from danger further perfected.

Asymmetrical spiral coiling of the shell evolved allowing the snail to balance, to breathe through gills and fit into narrow crevices.

Fertilization no longer took place in the water but inside the female and eggs laid either singly or in strings. Often at this stage, the larvae had a swimming stage. Several families of sea snails had reached a large size and adopted carnivorous diets.

The Move to Land

The most crucial survival step here was the further development of the shell.

It is thought that the first land snail evolved as soon as there were plants on land- about 350 million years ago- when plants required very wet conditions. Survival on land meant period of unfavourable conditions with climatic variations affecting the snail whose body is still largely water.

Earliest land snail fossils were found from the period of 350 million to 260 million years ago [Mississippian to Lower Permian]. The largest species discovered, Dendropupa vestusta, was cylindrical and about 8mm in size and had 9 whorls.

Unfortunately, no fossil land snails are known from the Paleozoic up to the Paleocene [about 70 million years ago] and this gap has prevented scientists learning much of land snail evolution. What is known is that pulmonates and operculates were the two groups that migrated to land. They survived by changes in patterns of behaviour and adaptations to drier conditions. The pulmonates also adapted their structures significantly. Respiration could no longer take place by gills so lunbgs evolved. The evolution of a second pair of tentacles with eyes at the tip of the top pair assisting in their adaptation to land.

There was a crucial need to conserve moisture. Operculates exploited the operculum to prevent water loss but still to allow oxygen and carbon dioxide exchange through tiny pores or channels. Pulmonates developed the ability to aestivate i.e. hibernate where they retract into their shells, slow their heart beat and become totally inactive. In these harsh conditions, they secrete a mucous ‘door’ called an epiphragm. This membrane prevents water loss but is permeable to oxygen and carbon dioxide. Stories exist of some Mexican desert snails that survived for 6 years in a box at the back of a drawer of a scientist in San Francisco.

The Move to freshwater

Substantial water level fluctuations have taken place since the ice ages. In response to these extreme changes, freshwater snails have been forced to adapt—or go extinct.This move meant a move from a salt to a salt-free habitat and the overcoming of problems of salinity, reproduction and more isolated communities many of which were affected by the weather. Many groups of snails have successfully transitioned to freshwater. They breathe using gills which are sometimes external [Valvata] or breathe air through a long siphon-like tube. Some can do both which is an advantage in water with a low oxygen content.

Snails with operculums were able to seal up in dry conditions and then ‘wake up’ when the rain came. Whilst the operculates were single sexed, the pulmonates were generally hermaphrodite i.e. both sexes and cross fertilised. In very dry conditions or where an individual was isolated or the only survivor of harsh conditions, the animal was able to self-fertilise. This meant that the survivor who was possibly a stronger specimen genetically, was able to ensure the continuation of the species.

Pollution of waterways is causing rapid extinction of many fresh water species today.

What about the Semi-slugs and Slugs?

Semi-slugs have evolved with a reduced shell into which the snail can no longer retreat. Creating a shell takes an enormous amount of energy and these snails can use that extra energy in other aspects of their lives. They have adapted their behaviour to minimise water loss often feeding in the cooler hours and in wetter conditions.

Slugs have evolved even further to live without a shell though they have internal calcified vestiges of a shell. These animals have adapted to maximise their ability to conserve moisture and similar to semi-slugs become active at night, in the cooler hours and in live in wetter conditions.

Slugs have evolved independently from different snail groups. As a result, they are common only in certain areas of the world. The humid areas of south-eastern Australia and South Africa are two such centres of diversity. Due to wide transportation of European slugs and their association with home gardens and agriculture, most have a false impression of their diversity.

The keys to the survival of semi-slugs and particularly slugs are water and calcium. Water in terms of a preferred moisture habitat and calcium meaning its lesser importance in the reduced need for shell production, are the major factors. In favourable conditions, protection against predation is a secondary issue. Without a shell, slugs can slip into narrow spaces and can distort their bodies in an attempt to reduce the water loss.

Snails became the most ecologically diverse class of animals being equally at home in the oceans, freshwater and on land. Whilst there are about 70 000 species of snails and slugs, there are more than 3 million species of insects. However, there are only a few species of marine insects.

6 thoughts on “How did the land snail evolve?”