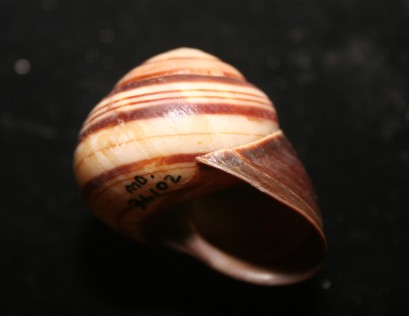 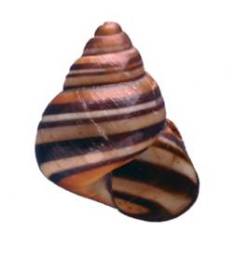 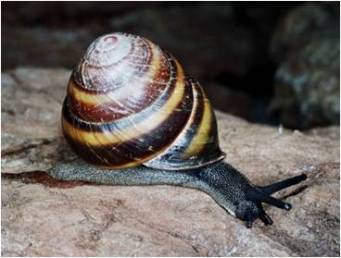 The Camaenidae is one of the largest and most successful landsnail families in Australia. Species range from small to very large in size (5-100mm shell diameter) and have a variety of shell shapes, probably more diverse than any other family in Australia and ranging from discoidal and lenticular to globose, trochoidal, conical and elongate. All but one are dextral. Whorls may be rounded, angled, keeled or shouldered. The spire may be flat to elevated dome-shaped to conical. The sutures may be flat or slightly to deeply impressed. Species may be perforate or imperforate with the umbilicus fully or partially concealed by a reflection of the columella. Camaenids generally have a reflected and thickened lip on reaching maturity, although in some species this may be barely discernable. Apertures are generally lunate in shape and most eastern Australian taxa lack apertural barriers and constrictions, however they are present in some groups. A common feature found in some camaenid taxa is a sulcus or depression located immediately behind the lip. Shell sculpture and surface microsculpture is extremely diverse ranging from smooth to radially ribbed, with spiral cords or incised spiral striae, wrinkles, pustules and malleations. A periostracum is present and well developed, often bearing setae, scales and various other raised projections. Colour is extremely variable but mostly fluctuates between shades of brown and yellow; spiral colour bands are a common feature. In some arboreal species colour is more exuberant and patterns may comprise maculations, spots and speckles as well as spiral bands.

Camaenid animals have long slender ocular tentacles and a foot of narrow to medium width, lacking any divisions or fringing borders. Most east coast species have an eversible gland called a ‘head wart’ situated between the superior tentacles that emits an attractant pheromone. Camaenids lay clutches of pearly white eggs under logs, rocks and leaf litter, however not a great deal is known about their biology.

Camaenids are basically herbivorous and feed mainly on decaying leaves and bark, microalgae, fungi and lichens. Most camaenid snails are either terrestrial or semi-arboreal, usually seeking shelter under logs, rocks and leaf litter or sheets of bark on tree trunks; hollow logs and tree trunks are another favourite refuge. A few species are fully arboreal and attach themselves to leaves and branches of trees.

The family has an unusual disjunct worldwide distribution, occurring through much of eastern and southern Asia, Australia and New Guinea with a second radiation in parts of central and northern South America-particularly in the Carribean. Camaenids are found Australia-wide with the exception of Tasmania and the SW corner of Western Australia. A few species are even found in the centre of Australia.

Bishop, M.J. 1978. A revision of the genus Thersites Pfeiffer (Pulmonata: Camaenidae). Journal of the Malacological Society of Australia 4: 9-21.

Clark, S. A. 2008. Revision of Meridolum and allies. Molluscan Research.

Zhang, W. and Shea, M. 2008. A new genus and species of the family Camaenidae from New South Wales. Molluscan Research.